Daydreams was shot and edited during the winter of 1974-75 by North Shore resident, Craig Beck. Thirty years later it remains the last, un-forked pea on the plate of American ski-film making--a rare inspiration.

"My basic idea was a fantasy type of film," recalls self-taught filmmaker Beck, 58, who lives in Cedar Flat on the North Shore. "I wrote it somewhat like a symphony with an introduction, the hills and valleys, and the climax. I didn't want a lot of narration like other ski movies have--no build up of bull. So I set the film to original music plus some which I bought from Pink Floyd."

Big Air
Whether it's skiing the steepest of the steep on "Idiot's" at Alpine Meadows, hang gliding the California coast, carving rowdy lines in the Canadian Bugaboos, or watching Craig's younger brother Greg uncork a then-record 100 feet of air off Palisades Tahoe's Palisades, Daydreams stirs the soul and piques the psyche into an almost paranormal validation of freedom. Scenes swell and crash like teen-age mood swings.

"The big jump is still something that blows me away," admits Beck who moved to Tahoe with his family in 1960. "I'm still actively filmmaking and I've been privileged to work with today's finest skiers and boarders. However, those guys, back then, defined big air. Greg's jump is truly incredible. We measured it and it was over 100 feet. The damn jump, though a perfect landing, knocked my brother out cold," recalls Craig Beck.

Although Greg's launch into the air is the film's biggest left hook to viewers' jaws, the film follows on with other ecstatic jumps that cross over into Oz. One has to remember that skiing was just growing out of the Jet stick and Bear Cat binding era into new technology. Most of the film's skiers, which included Chris Von Der Ahe, Brady Keresy, Pecos Welch, Earl Downing, and Tuck Rivard, skied on rudimentary equipment in blue jeans and wool shirts. That's what makes some of the jumps--such as the back flip by the late David Burnham off the Palisades into 80 feet of air--even more remarkable.

Mark Rivard was the only one to get hurt. Near the end of filming he broke both ankles jumping off the Palisades. "I was really upset when Mark hurt himself," admits Craig, who began his journalistic career as a messenger for AP during the Palisades Tahoe Olympics. "Mark was the best and most beautiful jumper. Up until then we'd been filming without any type of injury. But his injuries didn't stop anybody. The next day David did his flip off the Palisades, an incredible feat."

Production
What's more remarkable than the skiing was the film's production. Beck's previous experience up till then had been only a Super-8 ski movie set to music called "Timepiece," and a 16-millimeter short he'd filmed for Hans Gmouver in the Bugaboos.

Daydreams cost $100,000 to make. Taking out loans to cover costs, Beck did practically everything himself in Orson Wells-like fashion. Beck designed new camera mountings on the wing tips of gliders and inventing unusual dissolve transitions. He was the film's cameraman and he filmed sequences with a beat up, Bell and Howell and Aeroflex cameras. He edited the footage in his own house using a crude A and B roll editing process. He even mastered the original soundtrack (along with Steve Connelley, Blair Pretz, and Ann Vieille). He estimates it took 100 days of filming and 15,000 feet of film to get what he wanted.

"I finished editing the film the night before it was supposed to premiere at the Cobblestone in Tahoe City," Beck remembers. "I also finished it flat broke and exhausted. I'd been working sometimes for days on end without sleep to get it done. I was obsessed."

On the Circuit
Audiences loved it, but distributing the film became a Titanic problem, partially due to Beck's lack of money and marketing experience.

"Whenever it showed I had success. I mean we outsold "Jaws" that same year at the Cobblestone. I booked it from Redding to Santa Cruz, mostly at colleges. In Monterey I flew up and down the community all day in my hang glider to promote the showing. I even flew off the Civic Auditorium in Redding," says Beck who once held the World Hang Gliding Altitude Gain Record at over 20,000 feet.

"Then I went to L.A. and just burnt out. I was emotionally drained and all the traveling wasn't helping my marriage. When Dave Burnham died in a motorcycle accident, I was so bummed I shelved it (the film) and I went back to carpentry as a living."

At Tahoe
Through the years Beck has worked on other films including "Ski Extreme." While writing a screenplay for a feature-length movie about the life of Snowshoe Thompson, Beck became heavily involved in resurrecting the historic ski discipline of longboard racing. He formed the National Longboard Association in 1994.

"I still love to make films," says Beck. "A primary passion for me is shooting pictures and putting them together. Daydreams remains very special. When I made my movie ski films were a weak market. Today it's quite another story. Daydreams remains very current in today's big mountain skiing. I'm still surprised by its recognition and the enthusiasm for it by the best skiers
today. They like it." 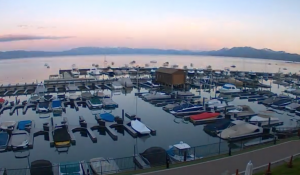 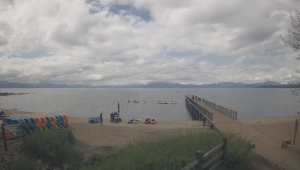